As the new principal at Loudonville Elementary School beginning Jan. 3, Scott Thompson is returning to where he grew up and where the foundation of his career started. Elementary education.

Attending a recent event at the school, Mr. Thompson was pleased to see such a strong sense of community. 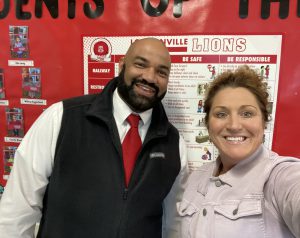 “During my visit I loved seeing high levels of student engagement within the classrooms and lots of friendly faces,” he said. “However, the best things I witnessed during my visit were the commitment of staff and teachers to the students, accompanied by a welcoming school environment and a sense of community.”

When Mr. Thompson starts in his new role on Jan. 3 he is ready to begin meeting and listening.

“I intend on taking time to introduce myself and meet with all stakeholders to gain a better understanding as to the future direction of the school,” he said. “As a former elementary school teacher for 10 years, I longed to return to my roots after 8 years of administrative service at the secondary level.”

He has also served on both the principal and assistant principal positions at KIPP: Tech Valley Charter School between 2013-2018. He taught and did administrative time at Schools 14 and 12 in Troy, respectively.

“Mr. Thompson brings a wealth of experience and perspective to the role of Loudonville Elementary Principal,” said Deputy Superintendent Kathy Skeals. “After spending years in secondary education, Mr. Thompson is eager to return to his roots not only as an elementary educator but as a member of the Loudonville community, the area where he was raised as a child.”

Mr. Thompson grew up on Emerick Lane and has “fond memories of playing with friends during summers at Southgate’s baseball field.”

While he earned his bachelor’s degree from Assumption College in Worcester, MA, he returned to Albany’s College of Saint Rose for both his master’s in elementary education and a New New York Certificate of Advanced Study, Educational Administration.

His wife, Rebecca works in education as a speech pathologist. Their children are Maxwell, age 5, and Olivia, five-month old. Their 11-year-old yellow lab is named Steve after Mr. Thompson’s father.

His adventures over the years have included skydiving, jumping off a building in Las Vegas, and swimming with sharks in Mexico and Hawaii.