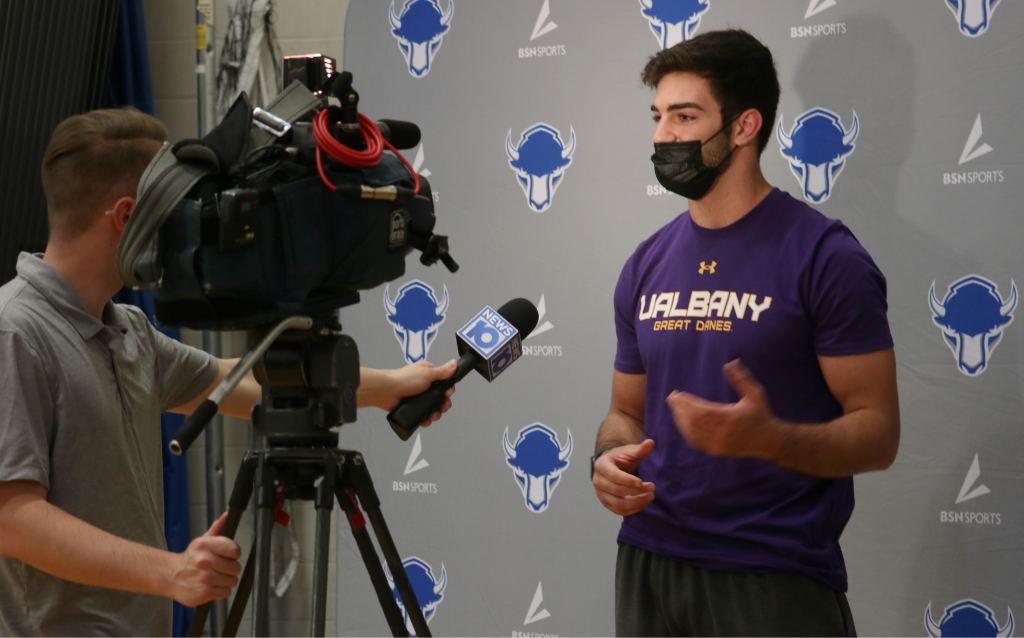 Ghassan navigated a very challenging recruiting process and committed to Coach Greg Gattuso and the University of Albany Great Danes football program. Ghassan was named a first-team Times Union All-Star as a defensive end. He has been a relentless worker and he has seen the results. 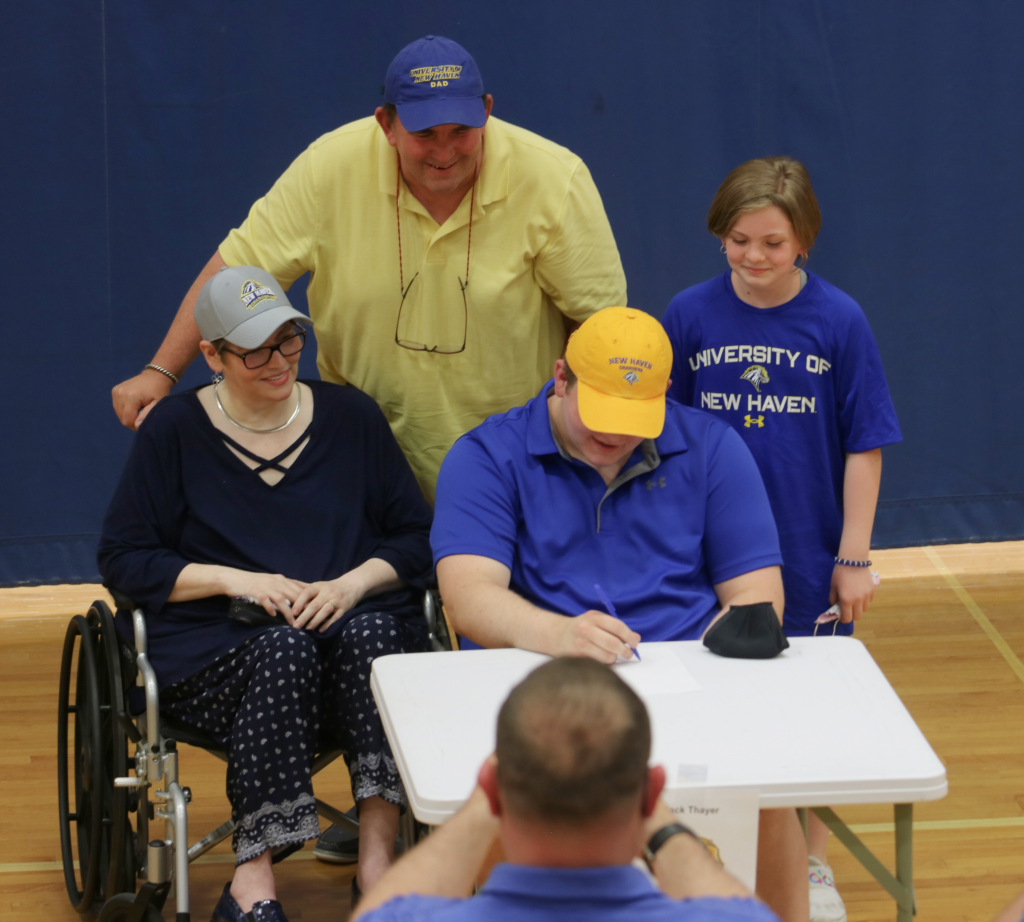 Jack will be playing defensive line at the University of New Haven. He has been one of the best leaders in our football program throughout his time at Shaker. Jack battled through injuries in his senior season and was an integral part of the team’s defensive success. 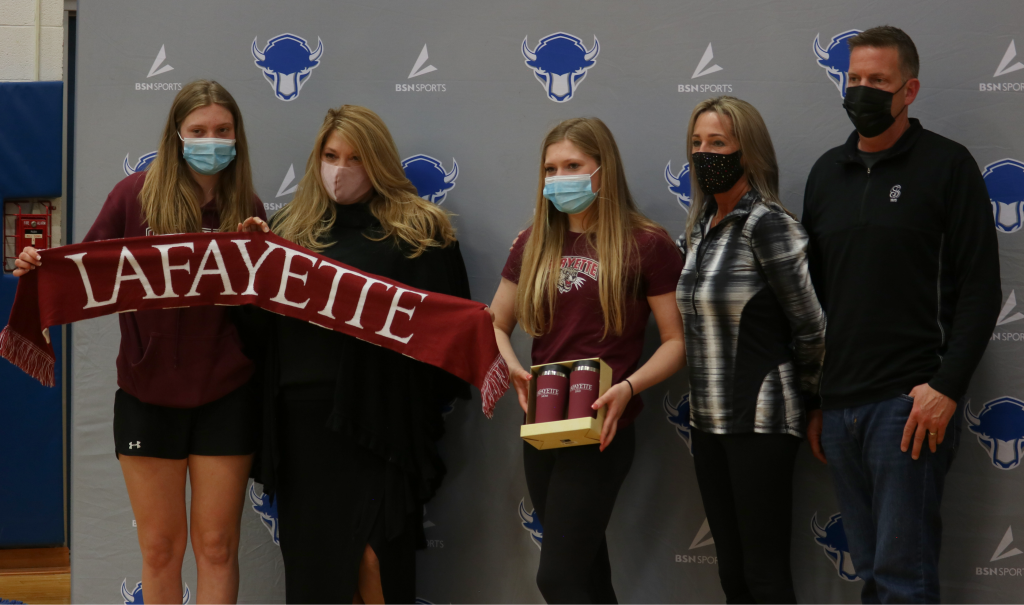 Amber is excited to continue her swimming career at Lafayette College – Go Cheetahs!  Prior to signing her letter of intent, Amber was a club swimmer for a number of years, and a varsity athlete for all four years of high school. She’s been a key player for the Shaker Bison, often showcasing tremendous strength in our A relays, in the 100 Butterfly, 100 Free, and 50 Free.  She was a Sectional competitor all four years, a sectional finalist 3 of those years, and a team captain in her senior year. 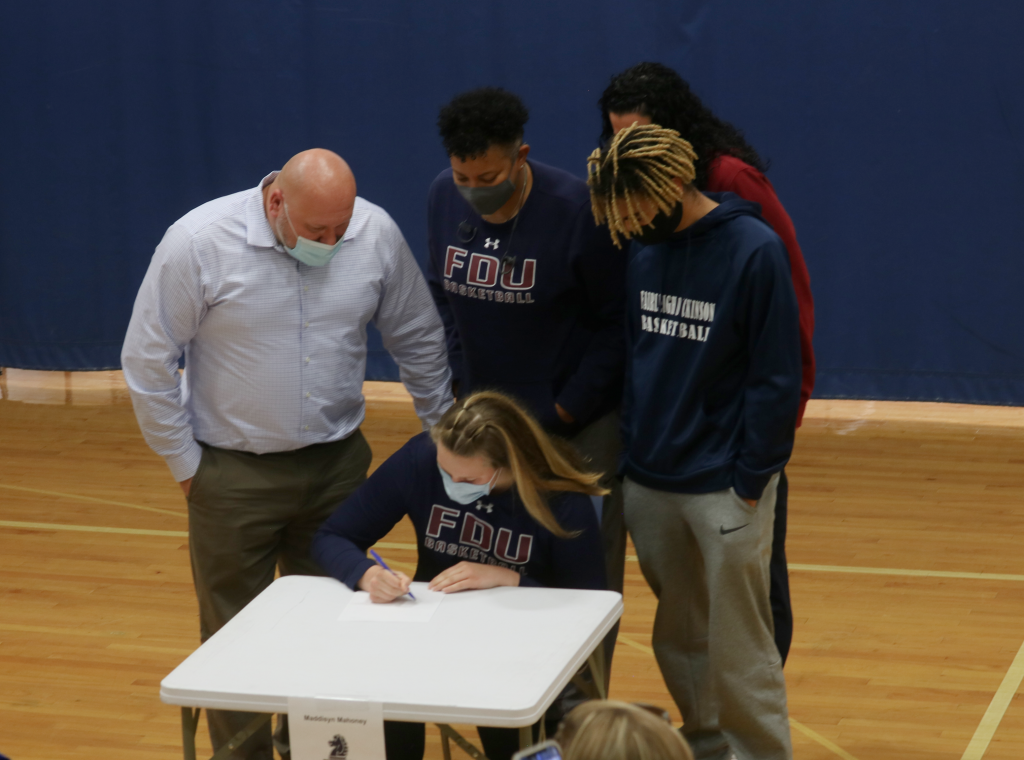 Maddisyn will be playing basketball for Fairleigh Dickinson. At Shaker, she was the basketball captain, and held numerous titles: third team Suburban Council All-Star 2020 & 2021, Suburban Council Senior All-Team, All-Star team nomination for both the Times Union and Gazette 2020 & 2021, All-Tournament Team Averill Park Tip-Off Tourney 2019, and has been selected multiple times for athlete of the week. 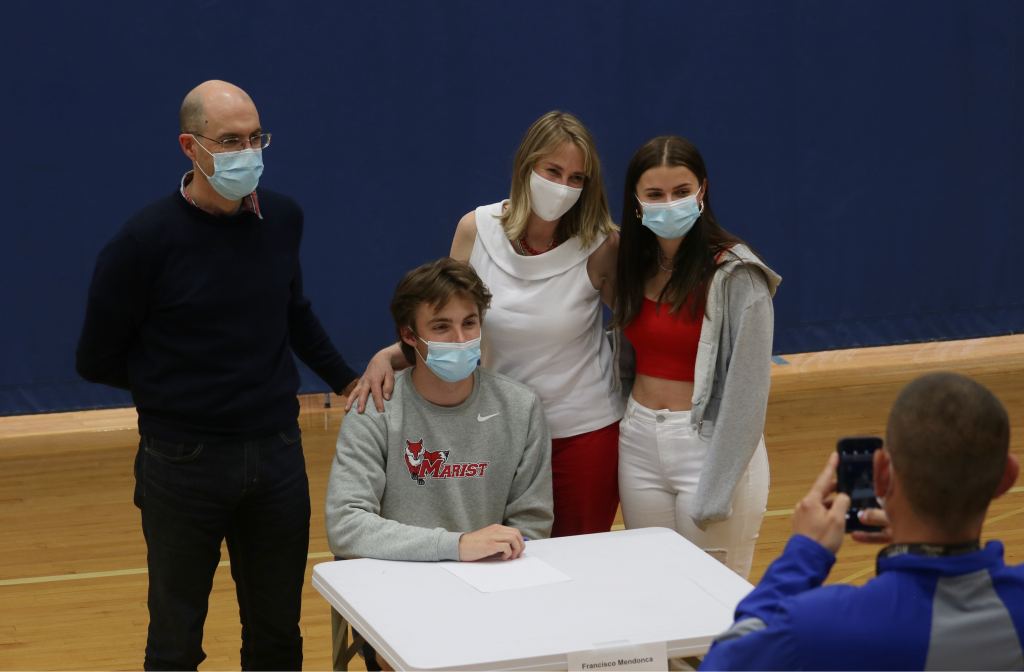 Frank Mendonca, who will be attending Marist College in the fall, has been a varsity cross country runner for three seasons. He has recorded times on the courses that Shaker High teams have competed on for over 50 years that rank near the top of the list. Frank has consistently been a team leader, one of Section 2’s best and was recognized by Bill Meylan of the Tully Runner website as one of the top cross country runners in the state. He has the ability to be a successful Division 1 runner in college. 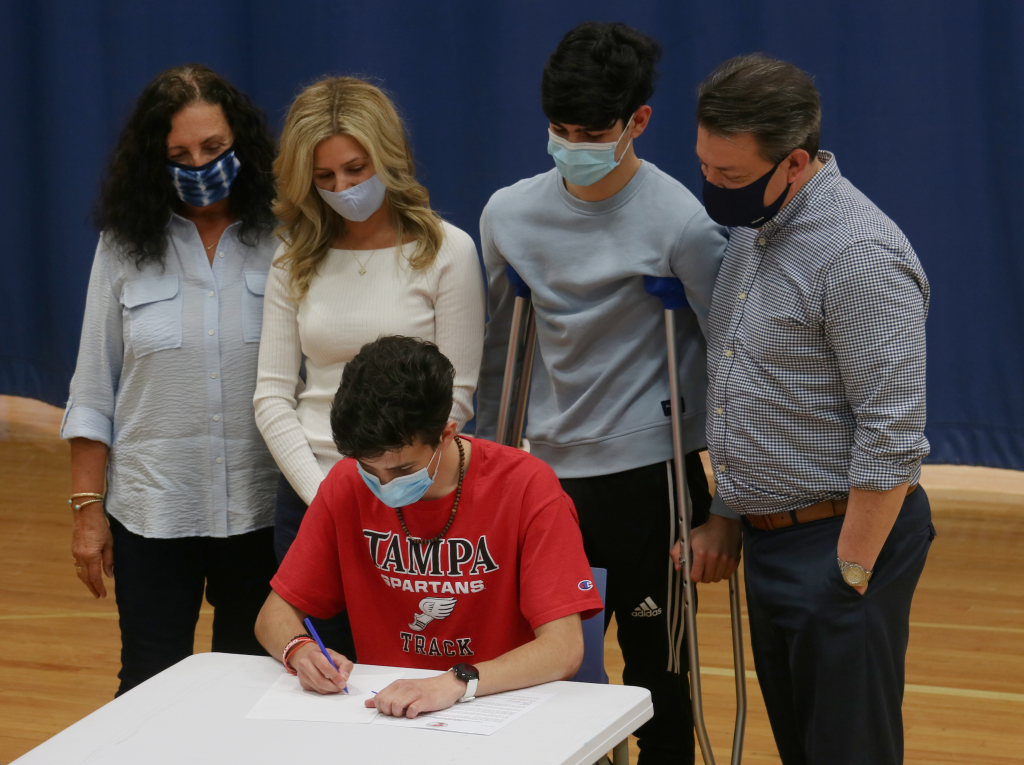 Ethan has been a long time sprinter for the Shaker Bison track team and is going to continue his success at Tampa. He is currently the captain for the sprinting boys outdoor track team and has had many 1st place finishes, accolades, and top place finishes throughout his running career at various invitationals, sectionals, and other big meets; including an impressive 53 seconds for the 400m dash. Most importantly Ethan is a born leader, someone who looks to help his fellow teammates. Striving to continue to get faster each day makes Ethan’s work ethic one of the best in all Shaker athletics. 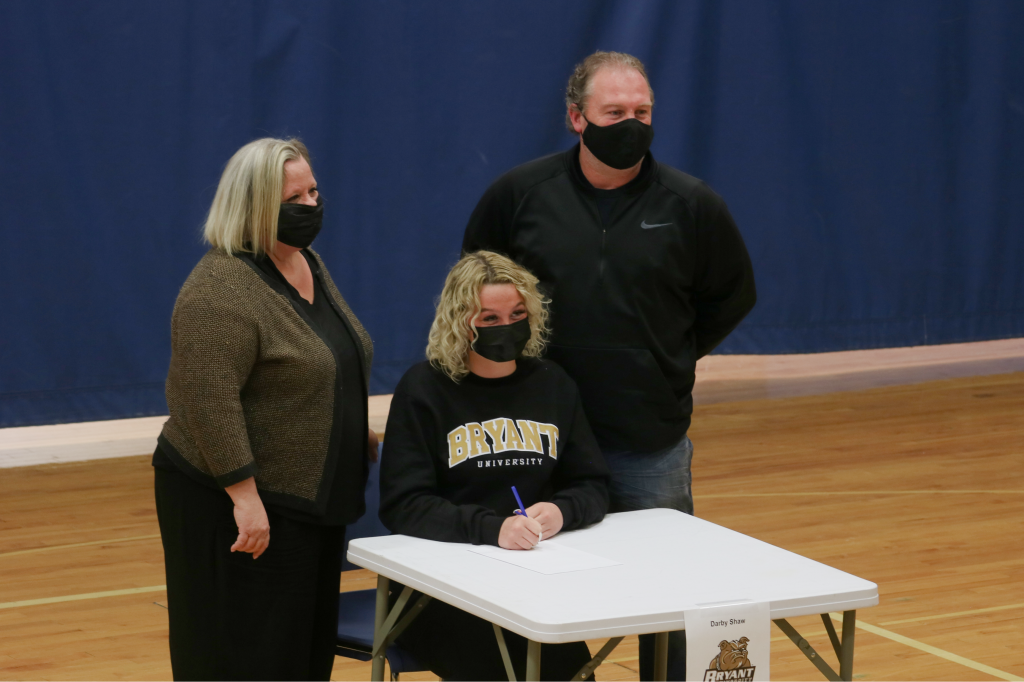 Darby has been an integral part of the Shaker Cheer program since joining and will continue to cheer at Bryant University. She has been one of SHS most valuable tumblers and stunters. Some of her accomplishments include 2020 Top Tumbler for the entire program, was a member of the Suburban Council All-Stars for Cheerleading for the 2019-2020 season for her outstanding talent, and the 2021 Most Spirited athlete for Shaker Cheer. 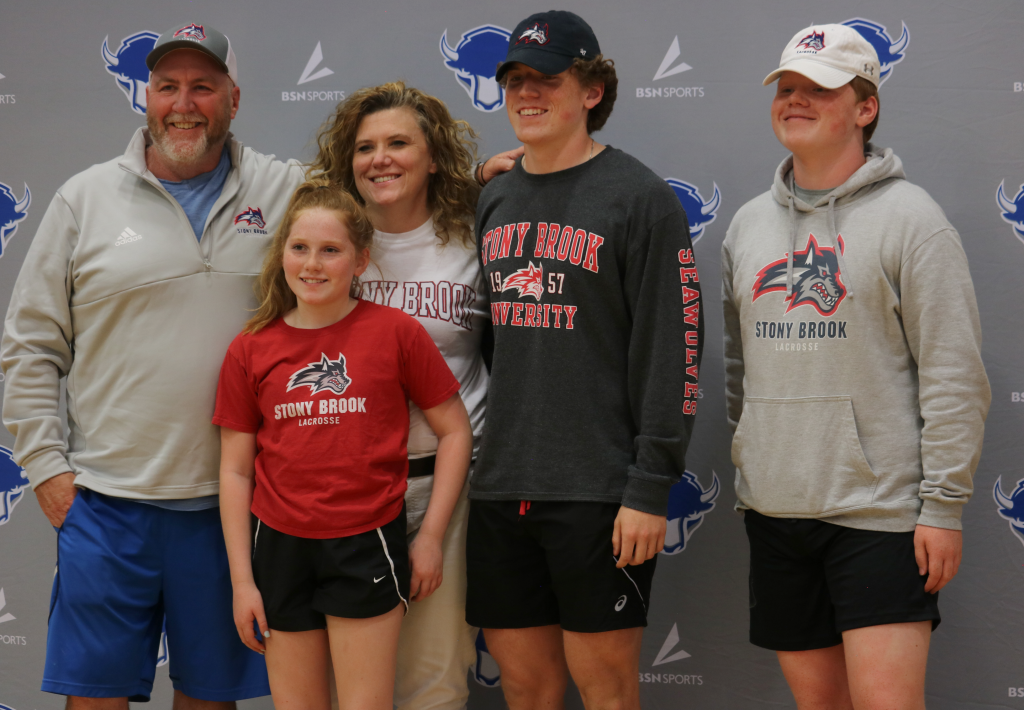 Riley was recruited early and verbally committed to play Division 1 lacrosse at Stony Brook prior to the 2020 season. He is a 3 year varsity starter and first ever Shaker Under Armour representative during his sophomore to junior summer. Riley is a standout two sport athlete excelling in football and lacrosse. 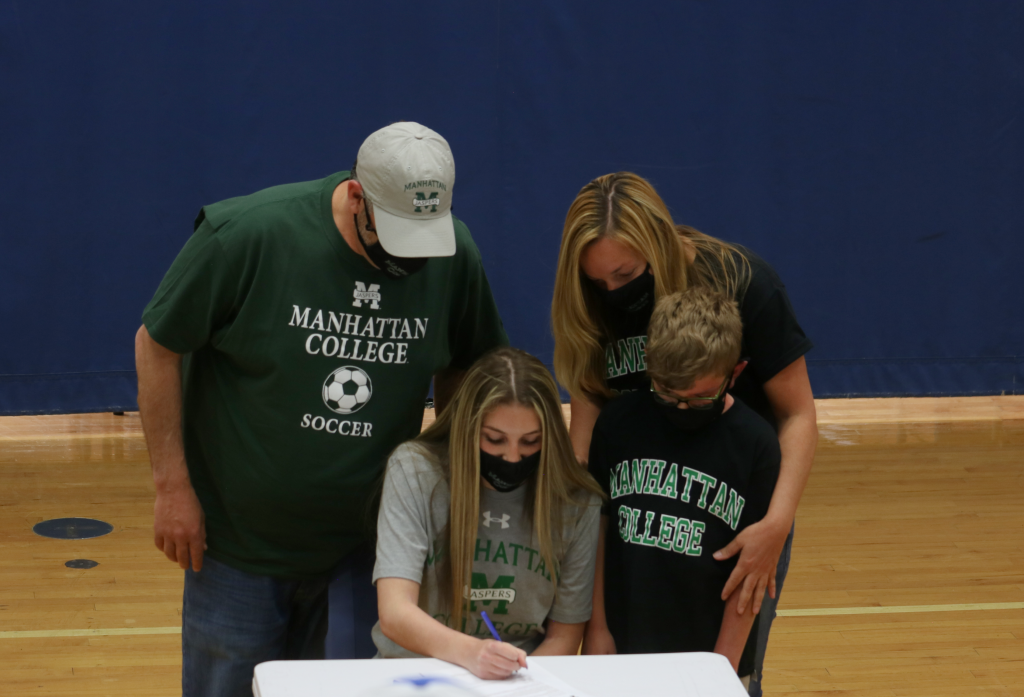 Olivia will be playing soccer for Manhattan College. She’s the team soccer captain, and back-to-back team MVP with stats like: 4 goals, 5 assists, and first team All Star. Olivia was voted second team All State. She’s a key player in the center of the field and a leader on and off the field! 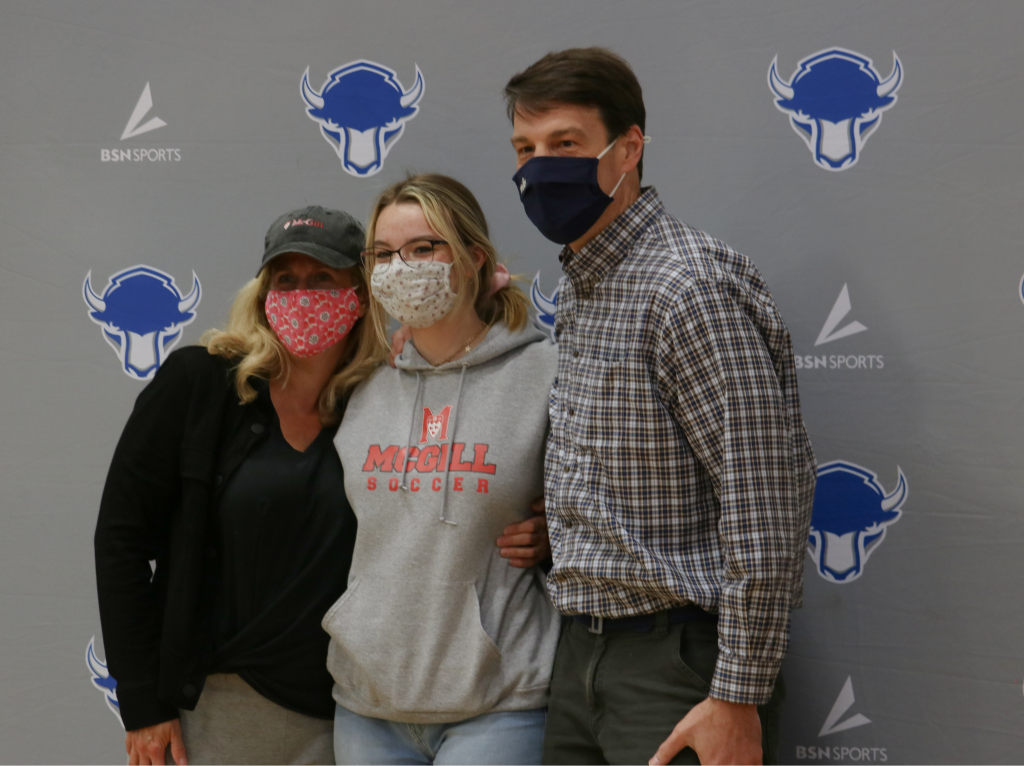 Bria is a five year varsity soccer player and will continue to play for McGill University. She received the Bison Sportsmanship Award. Tallied 6 shutouts for 12-0-1 Championship Season! Bria is a total leader on the field and helped keep players level headed, showing what varsity soccer is all about. Bria gave many great speeches and was top 2 goalies in section 2 with save percentage! 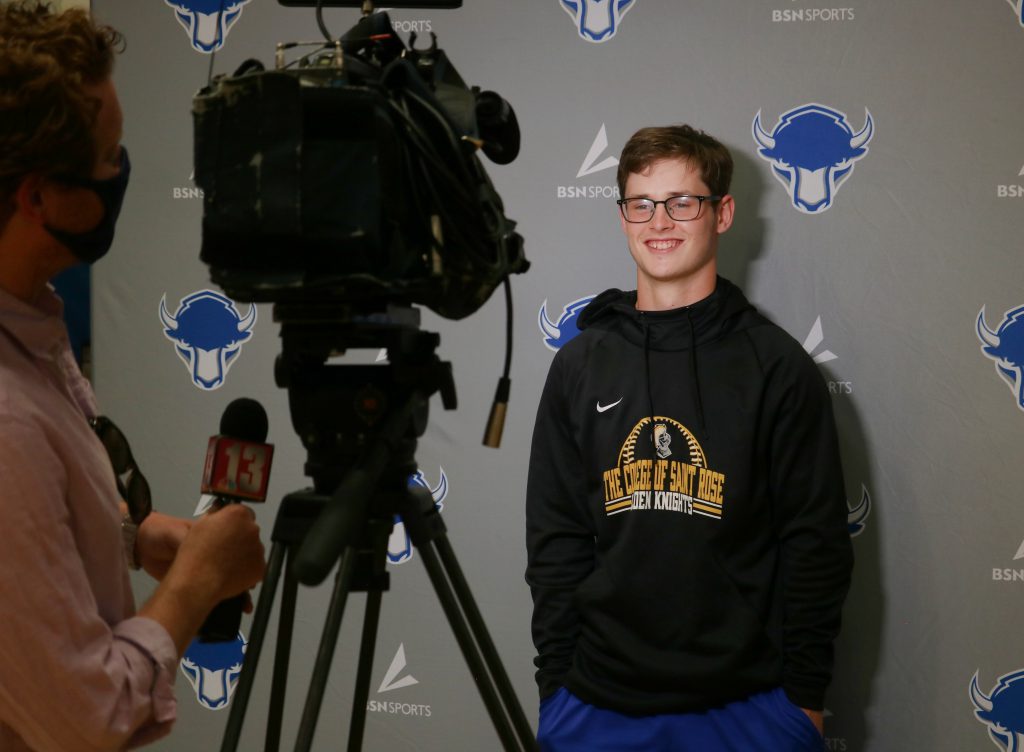 Joey, who has been a three sport athlete for his entire high school career and a leader for every team, will be playing baseball for Saint Rose. PerfectGame.org saw enough potential and talent in him as a baseball player that they completed a player profile last year. This year has been unlike any other for Joe as he did not have the chance for any down time between three varsity sports. He finished his varsity basketball season in early March, transitioned right to football where he played quarterback until the end of April, and the day after football ended he put on his baseball uniform to pitch and play first base (where he has one of the top batting averages on the team). He earned the victory against Niskayuna the first game he pitched this season. Joey has been a true ironman this year and is the type of athlete every coach wants. He leads by example, is committed to each team, and is one of the most competitive players you will meet. 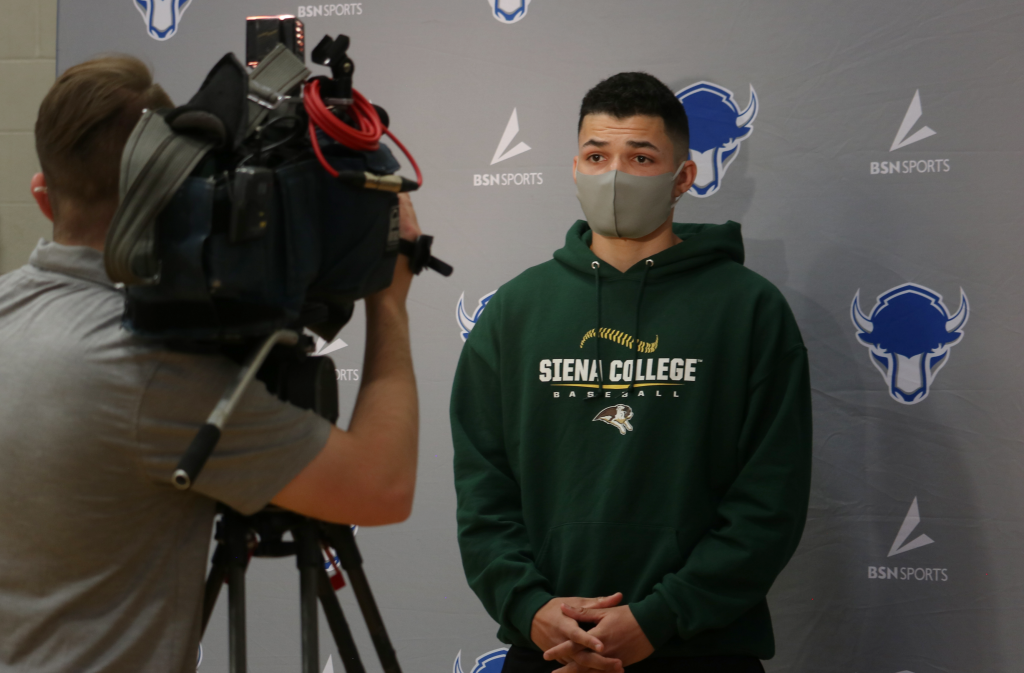 Armando has been one of the hardest working athletes in the Shaker baseball program and will be playing for Siena College. He. He busted his tail two years ago just to make the JV squad and had a productive season on the mound. Since that time, Armando has grown a few inches and added muscle mass to his frame by spending a lot of time in the weight room. He was chosen to be a member of the Northeast Super Qualifier All-Tournament Pitching Staff last year​. Prep Baseball Report of NY featured him in its “Uncommitted Spotlight” this past January and identified Armando as a pitcher who has four legitimate pitches that will translate to the college level. He has the potential and physical tools to succeed at the next level.