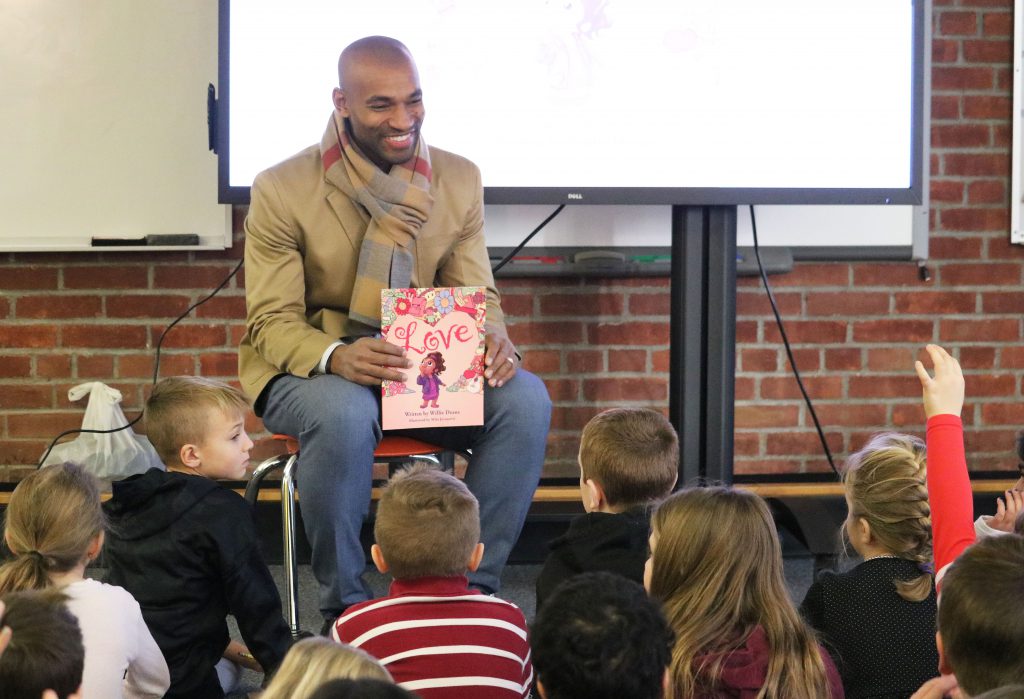 Local author and former professional basketball player Willie Deane visited with students at Blue Creek and Latham Ridge on Friday, Jan. 10. Deane, a Schenectady native, read his book called “Love” and shared not only about the book but about his life and what it’s like to travel around the world as an athlete.

The main character in “Love” is named Sara and she uses the word love often but doesn’t understand what it means. Sara then asks her parents to explain it and they give her examples from her own life and show her different ways to express and recognize love. Sara soon understands how powerful love is and realizes that she shows and receives love all the time.

Deane originally came up with the idea for “Love” during his oldest daughter’s bedtime routine, where he would make up different stories for her every night.

“This is one of the stories I told my oldest daughter and she continued to request this story over and over again,” Deane said. “After a while, I decided I need to write it down so it would be more organized and she would be able to absorb the message and have these words with her, even long after I’m gone.”

Since the book was released last Valentine’s Day, Deane has been traveling to schools to share the book and its message, which he says is important for not only kids but adults as well.

“The most important thing that I want kids to understand is when they’re being loved,” Deane said. “For example, some students may have family members who aren’t able to express love verbally or via touch. If these are the only forms of love that kids understand, then they may not think they are loved. That is one thing that I would hate to happen and that is one of the big reasons why I decided to publish this book.”

Deane plans to continue traveling around to schools to share “Love” and its message. He also has another book coming out next month.

“I want to continue to push this message. Not only to love but to also encourage kids to read.”

Deane is originally from Schenectady and currently resides in Guilderland with his wife and two daughters. He played high school basketball at Schenectady High School and college basketball at Boston College and Purdue University, where he was an English major. In his professional career, Deane played for more than a dozen different teams and lived in 15 different countries. He also spent time in the NBA with the Washington Wizards.