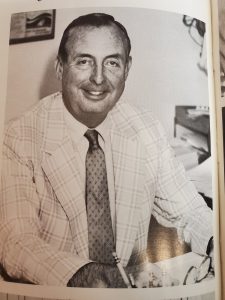 “He was a gentle soul and a strong leader,” said Deputy Superintendent Kathleen Skeals. “Dr. McManus was instrumental in a lot of the work that we carry forward today. He was the heart and soul of the district’s mission and shaped the philosophy of many young educators, showcasing what school can and should be for all students.”

Those who knew Dr. McManus said he was a firm yet gentle leader. He was the epitome of a leader and always made sure his employees and the students felt empowered. He would check in with new staff members to see how things were going. His ability to establish relationships with people in the district had an impact on so many.

“Dr. McManus was an integral figure in the district for several decades,” said Superintendent Corr. “Many of the practices he implemented more than 30 years ago are still used today. He was a mentor to me and so many others in the district. I often use the character traits that he instilled in his colleagues and students. His impact on the district will be long-lasting.”

Dr. McManus was known to focus on what students needed to be successful. He made students the number one priority each and every day. He made sure that the district was educating the whole child, not just what was written in a textbook or part of the course curriculum. He also worked to ensure that students would receive social emotional learning, decades before the term was coined by New York State.

“Dr. McManus was very helpful, supportive and willing to listen. I could always count on him to make good decisions for the children in our care,” said former Latham Ridge and Blue Creek Principal Dr. Rose Jackson. “He was famous for always saying ‘they just need the right framework of support.’ He worked to ensure the district provided the necessary support for children in their home school and that every child would grow. My family regarded him with the highest esteem. He was one of the nicest people to have in your working life.”

The Shaker Junior High School PTA established the Peter McManus Staff Recognition Award. The award is given to a junior high staff member who fosters staff excellence and who provides that little bit extra that makes our school so good. The award is a testament to Dr. McManus’ commitment to the district and working to ensure it was constantly evolving and providing the best education for all students.

“He demonstrated principles and protocols of successful leaders,” said former Shaker High School principal Dr. James Jackson. “He had sound intuition and knowledge and was very supportive of all students pursuing their dreams. He made sure the district prepared students for life after school.”

After retiring from North Colonie, Dr. McManus was an advisor and professor in the Russell Sage counseling graduate program. He shaped the minds of a number of future counselors in schools throughout the capital region and beyond.

“To say he is one of the greatest people I’ve known would be an understatement,” said Shaker High School Counselor Mike Bruni. “His impact on the graduate program was just as great as his impact on the district. Half of the school counselors in the area knew him and were impacted by him. I probably would not be at Shaker today if it weren’t for him.”

“He has been instrumental in my career,” said Shaker High School Counselor Arnel Joyner. “When Shaker High School came to him in 1997 and asked him if there were any recent Sage graduates he felt would be perfect for the job, without hesitation he chose me. He always believed in me and encouraged me to be the best I can be. The fact that he has been out of this district for decades and his impact is still felt and I am still meeting individuals whose lives he has touched is a testament to how special he was.”