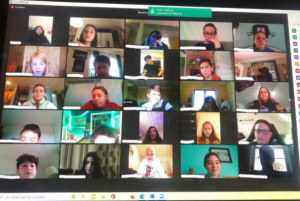 Shaker Junior High students practicing a newly learned language have made cyberfriends from Germany and gleaned insight into their culture.

SJHS German teacher Rosa Reeves and her teacher partner, Renee Thorpe have coordinated efforts with Christina Bannenberg, the English teacher from the Mons-Tabor-Gymnasium school in Germany. They have been connecting students through virtual spaces like Zoom and ePals. SJHS student Samya thought it was a wonderful activity, “I had a lot of fun learning about the lives they lead. It was cool to talk to kids living on a whole other continent.”

In January and March, thirty-one students from Latham, New York participated in Zoom rallies with thirty-four students from Montabour, Germany. The teachers grouped the students into breakout rooms where they could speak in pairs or groups of three. Each team had the challenge of answering questions about the opposite school and documenting the answers they gathered. The first team to complete all of the activities won the contest for the day. “I would like it if we could set a meeting like this for every two weeks to get to know them better,” said SJHS student Wesley. Another student, Peter, echoed that, “I think that we should Zoom more often. It was fun and cool to meet the other students.” Kaylee said, “I really like zooming and talking to them.”

“Being able to communicate with peers across the world in their language is an incredibly valuable experience,” said Deputy Superintendent Kathleen Skeals. “Through these interactions, our students have the opportunity to learn about the world and create lifelong friendships.” The students enjoyed their virtual exchanges and had new ideas for next time. “Maybe we can have a couple more classmates in the breakout rooms to have a bigger conversation,” said Bogdana, “I would like to find out what they are learning about in school.” Anna said she likes the Zoom meetings, but thinks that “it is more fun to write to her ePal than to use Zoom.”

The students have been writing back and forth as penpals for several months using ePals, a program that facilitates students from separate regions of the world to communicate with each other through a secure portal that can be monitored by their teachers.

Through Zoom, they could finally put a face with the names and conversations they’ve had this year. After only a few months of learning a new language, students were able to discuss simple topics such as the weather in both countries and what classes they were taking in school. They also talked to one another about their families and hobbies. “It was enjoyable to talk to somebody that was around my age and mature. I also liked doing activities with him such as trying to hear him and fill out the questions,” said SJHS student Ryan.

The students and teachers of both countries are looking forward to continued correspondence and many German and English conversations in the near future.