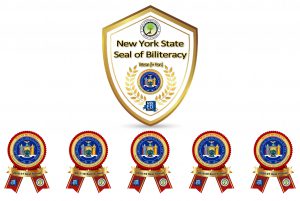 In an increasingly interdependent world, knowledge of world languages and cultures is a vital part of the preparation for a student’s role in the world community.

The mission of the North Colonie World Languages Department is to develop linguistic and intercultural skills that improve students’ ability to function in the global and international community throughout the world.

Our world language program starts with  exploratory in 6th grade where students have the opportunity to learn two different languages over the course of one year.

Students then select the language of their choice to study for two full years in grades 7 and 8. During this time students learn to discuss various topics with peers and how to interact in a culturally authentic environment.

The focus of the program is on developing interpersonal, interpretive, and presentational skills through speaking, listening, reading, and writing in the target language.

At the end of grade 8, students take the Checkpoint A proficiency exam. Successfully completing this course and passing the exam are requirements for graduation in NYS.

At the high school, students can continue their world language study in French, German, Russian, or Spanish and also enroll in Latin. After the completion of a level 3 modern language course or a level 2 Latin course, students take the Checkpoint B examination to earn their Advanced Regents Diploma.

The North Colonie World Languages Department offers two years of post-Regents language study in French, German, Russian, and Spanish and one year of post-Regents study in Latin through the University in the High School Program. Students in levels 4 and 5 have an opportunity to earn up to 10 college credits in modern languages and students in Latin 3 have an opportunity to receive 4 college credits in Latin. In addition, students of French and Spanish can enroll in the AP French and AP Spanish courses.